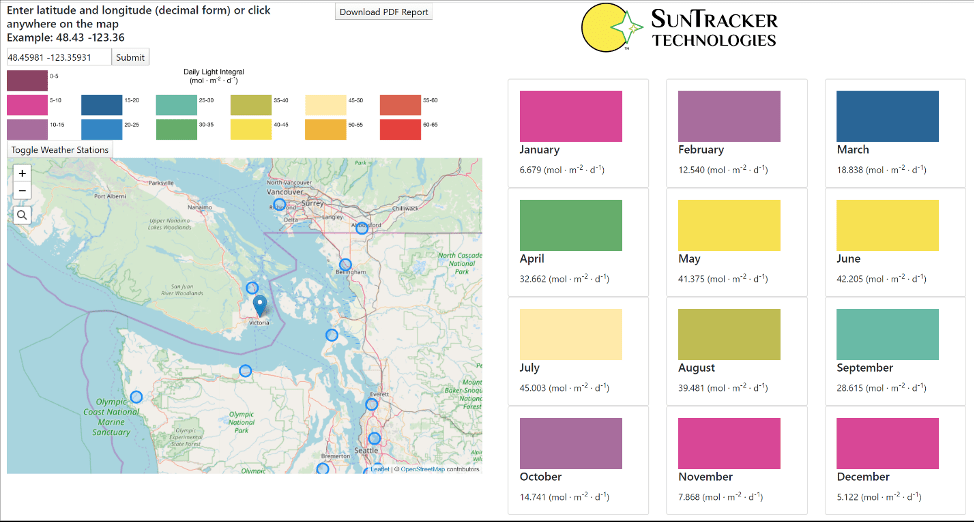 VICTORIA, CANADA (May 21st, 2020) – SunTracker Technologies is pleased to announce that it has developed a web-based free to use online calculator to predict monthly DLI values for anywhere in the world, based on climate-based Typical Meteorological Year (TMY) weather records from over 2,100 weather stations worldwide.

The Daily Light Integral (DLI) is a relatively new metric for farmers and greenhouse operators trying to decide whether crops will thrive in a given geographic location. It takes into consideration historical weather records that have recorded hourly direct sunlight and diffuse daylight for a minimum of thirty years, and from these calculates the monthly photosynthetically active radiation (PAR) available to field crops.

Previously monthly DLI values had only been calculated and published for the United States. SunTracker’s DLI Calculator performs these calculations for any location on the world using weather records from around the world.

Monthly DLI values are also important for greenhouse operators, however the PAR values inside greenhouses can be considerably less than in the field, and further depend critically on the greenhouse orientation, roof design, glazing properties, and shade covers. SunTracker Technologies is developing Cerise365+GreenhouseDesigner™, a web based greenhouse lighting design software to address these critical issues.

SunTracker Technologies (Victoria, Canada) is a world leader in the development of lighting design software. Having licensed its award-winning OEM software for use in such products as Lighting Analysts’ AGi32 and ElumTools (Boulder, CO) for architectural and roadway lighting design for over two decades, SunTracker is preparing to release its web-based Cerise365 + Greenhouse Designer™ software product for greenhouse and vertical farm lighting design, including climate-based daylighting.

Recent public health events have highlighted the need for food security in local communities. In northern (and less hospitable) climates like Canada long term, year round food growth will depend on indoor facilities such as greenhouses, vertical farms (plant factories), and hybrid facilities. Proper lighting is critical for these facilities to successfully produce the necessary quality and quantity of food to sustain the population at a reasonable cost. SunTracker has developed CAD modelling tools to allow the horticultural industry to assess and specify the most efficient and effective commercial lighting for the horticulture industry, lighting that is critical for the sustainability of food security.